The Cosmati family, created a particular decorative style for the interiors of medieval Romanesque Basilicas, so successful to dominate the artistic scene between the centuries XII and XIII, creating a school of artists specialized in this artcraft.
The most beautiful cloisters and ground floors in Rome’s Basilicas -and its region Lazio – are remarked by circles of polychrome marbles – often recovered in ancient roman constructions – enclosed by long lines of white marbles creating the effect of a “carpet” that leads the pilgrim to the main altarpiece.
The significance of this type of decoration is highly spiritual, and practical, infact the geometrical designs where aimed to provide a perception of mathematic order to the rigorous space of the Romanesque Basilicas, providing as well a rhythm to the religious procession heading to the main altar piece, during the most important liturgic dates.
The Cosmati and the Vassalletto, have been the most famous masters in the art of recovering the ancient roman marbles, and turning these materials in the precious tiles of these floor carpets, their fame crossed the italian frontiers, arriving up to London in Westminster.
In the middleages the “marmorari” – this is the romanesque dialect word standing for marble cutters – were working close to the ancient roman harbour in Rome since the former warehouses became deposits of ancient marbles, in particular the red porhyree coming from Egypt, the green serpentine coming from Sparta, and the ancient yellow coming from Libia, called Numidia in roman times.
The cosmatesque floors, are differents one by the other, the typology of designs is infinitive and represents a sort of code in marble, that just recent sudies started to decodify, and in this operation are helping the modern heirs of these past masters: 15 families that since the middleages pass from one generation to the other the secrets of this art the materials, and some of the precious comprehension keys.
Each Cosmati’s artwork is a joy for the eyes, my tour through the Medieval Churches will point out the Cosmatesques’ floors and the Vassalletto Cloisters. 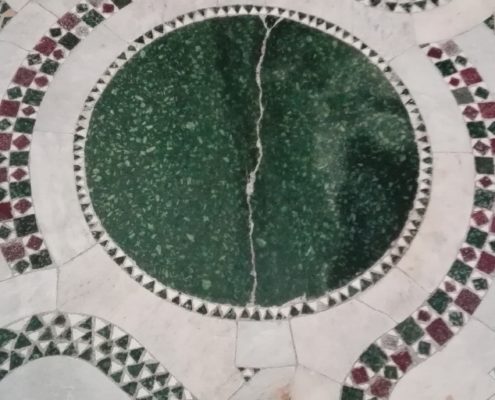 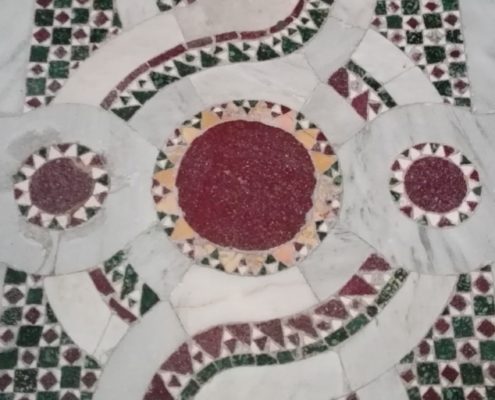 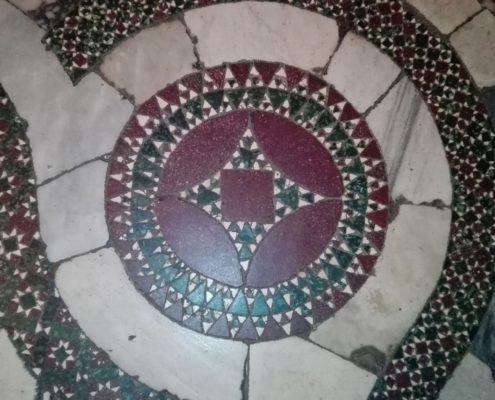